If you’re looking for an excellent router, the best Asus routers are the ones to consider. They are not only the most popular models around, but they’re also some of the most competitive in the Wi-Fi router world.

Asus has quite a collection of models as well, with offerings for both personal and business networks. So whatever it is you need – whether you’re a gamer who needs the absolute fastest wireless speeds or you simply want the best Wi-Fi coverage without shelling out a lot of money, you’ll certainly find the best Asus router for you.

On this list, specifically, you’ll find the top performers in different departments, as well as the best overall model for those looking to find the right balance between price and performance. These are our top picks for the best Asus routers. Whatever it is you’ll need, you’ll find something here.

Considering all brands? These are the best wireless routers of 2019 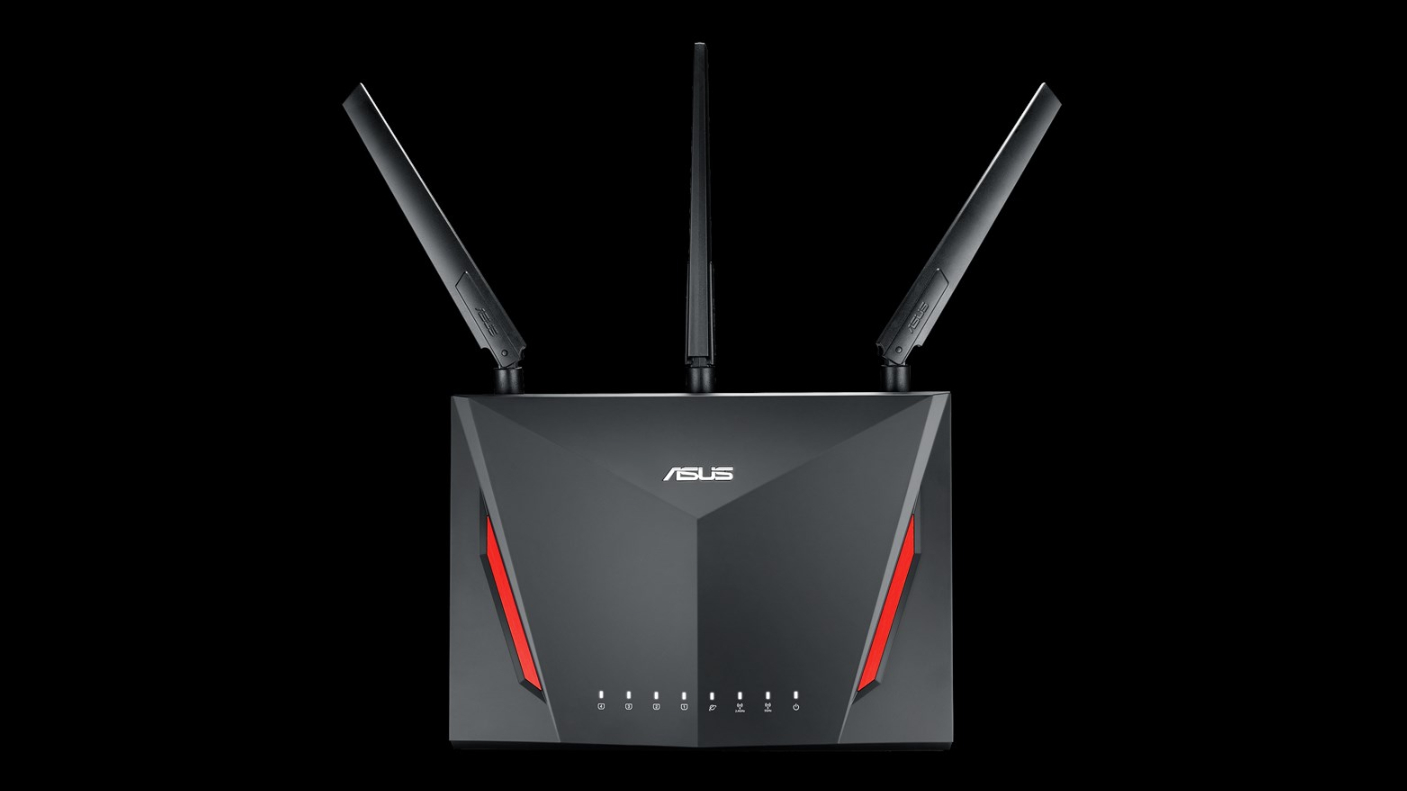 Okay, so our top overall pick for an Asus router might look like the head of a decapitated robot – with dark red eyes and an untidy antenna hairdo – but it’s performance, not appearance, we’re interested in here.

The Asus RT-AC86U gives you AC2900 wireless speeds, range boosting for better Wi-Fi coverage around your home, and even gaming acceleration technology. In actual fact, the RT-AC86U is positioned as a gaming router – which explains the aesthetics – but don’t let that put you off. It’s very easy to set up and a fantastic all-rounder.

The icing on the cake is that this Asus router, being one of last year’s models, can now be had (at the time of writing) for around a whopping 40% less than its launch price. It’s simply an incredible bargain in terms of price/performance ratio. 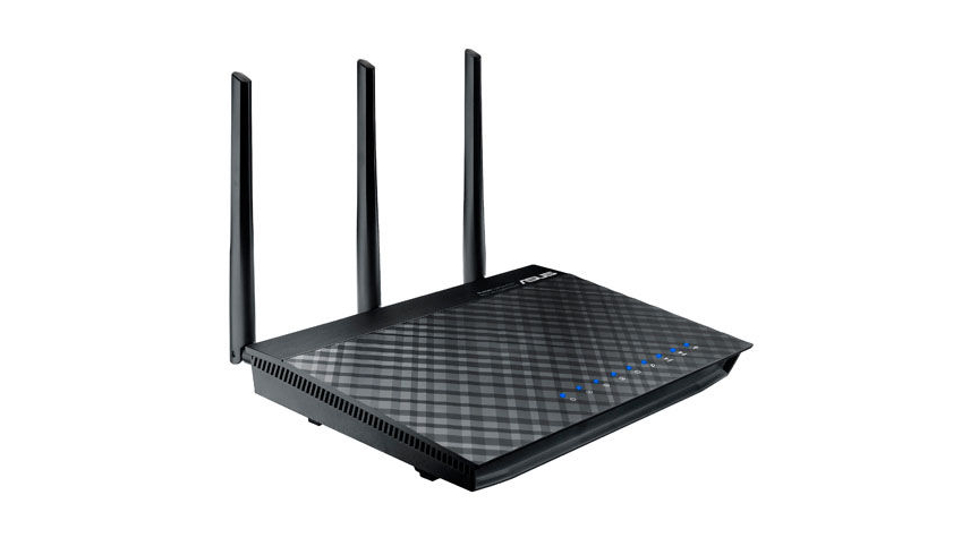 For those whose budget can’t stretch to our overall champ above, the Asus RT-AC66U is a sterling more affordable option which still offers great performance levels for the asking price.

It’s easy to get going with the RT-AC66U, and speeds remain impressive for what is by now quite an old router (the reason why the asking price has been cut in half compared to the original RRP). You also get a good range of features including Adaptive QoS to prioritize your internet traffic.

Think of this as a workhorse Asus router which is still fully capable of getting the job done without breaking a sweat, and can be had without any danger of breaking the bank, too. 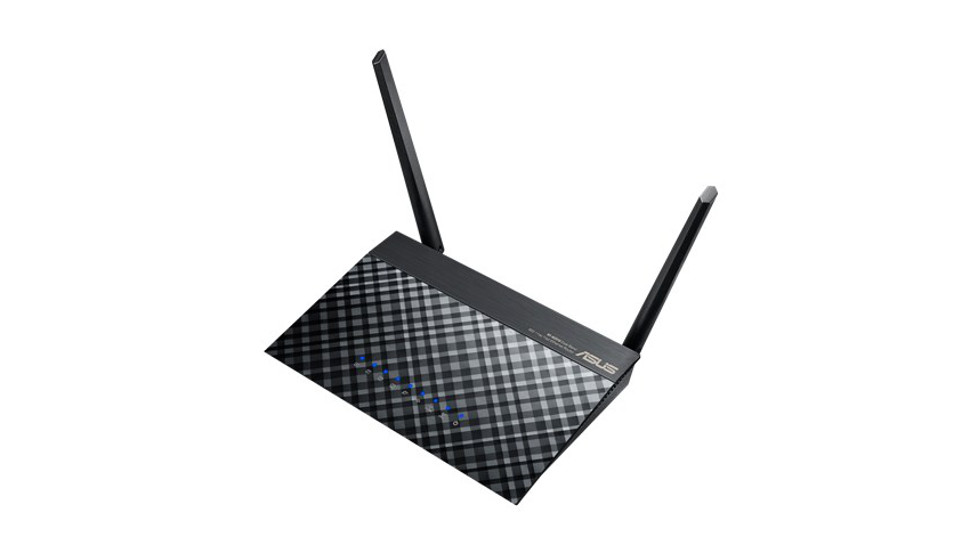 If you want the cheapest possible Asus router out there, without having to resort to buying some ancient – or indeed possibly dust-caked, second-hand – hunk of plastic which will likely only give you heartache in the long run, this is the model to go for.

In fact, we’d argue the RT-AC51U is pretty much as cheap as you can go while still getting a useful router. And it’s a reasonable enough model, offering 802.11ac dual-band Wi-Fi at solid enough speeds with a single USB (2.0) port for hooking up your printer or external storage. It’s a completely no-frills router, for sure, but the best Asus option at the true bargain-basement end of the market. 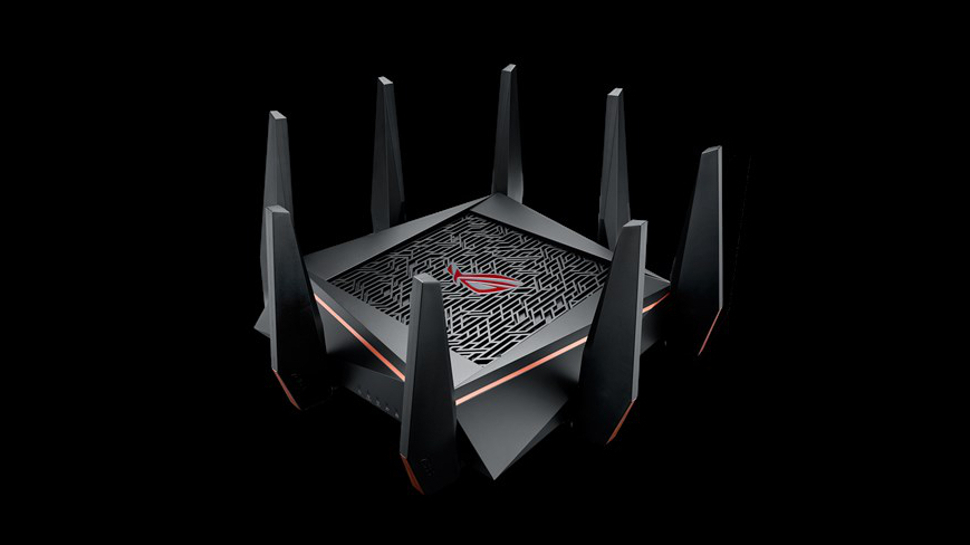 Now, this is a slight curveball in that gamers will be well-served by our best overall router above, the Asus RT-AC86U, and its fantastic value proposition. But if you want to spend more for the absolute best router for gaming, then you need the Asus ROG Rapture GT-AC5300.

This is a juiced-up-for-gamers version of the already excellent RT-AC5300, and like that model, it boasts strong tri-band Wi-Fi coverage thanks to eight antennas. While gamers of course swear by wired connections, wireless is still important for general usage (and gaming on mobile devices).

Speaking of wired, the GT-AC5300 has no less than eight LAN ports, twice the amount of the RT-AC5300, plus it has a slightly higher spec elsewhere (like double the memory). Moreover, it bristles with advanced features, including gamer-specific adaptive QoS and acceleration to optimize your connection.

As a gaming router, it really flies, but it isn’t cheap – although now this router has been around for a couple of years, it’s considerably more affordable than when first launched. The aforementioned RT-AC5300 is a good slightly cheaper alternative, but the price difference is so little at the time of writing, the clear choice for us is the ROG. 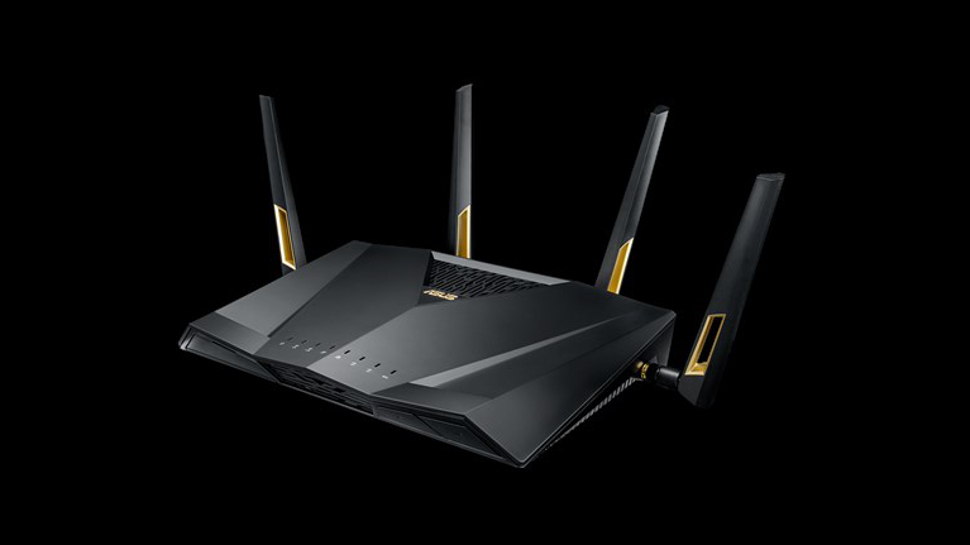 The RT-AX88U is built around the latest 802.11ax wireless standard (newly renamed Wi-Fi 6, but manufacturers are still using the ‘ax’ label) for the fastest Wi-Fi speeds, while remaining a relatively affordable model – it’s far, far from cheap, but you’ll always pay through the nose for the very latest tech.

This Asus router boasts superfast 5GHz speeds, and the 802.11ax tech also helps for better performance in congested wireless environments (where a lot of devices are being used over Wi-Fi).

Remember, though, that you’ll need client devices which also support 802.11ax to get the full benefit of the router’s ax speeds, and there aren’t many around right now (Samsung’s Galaxy S10 smartphone is one). The good news, however, is that Wi-Fi performance is still blazingly quick even with 802.11ac devices. 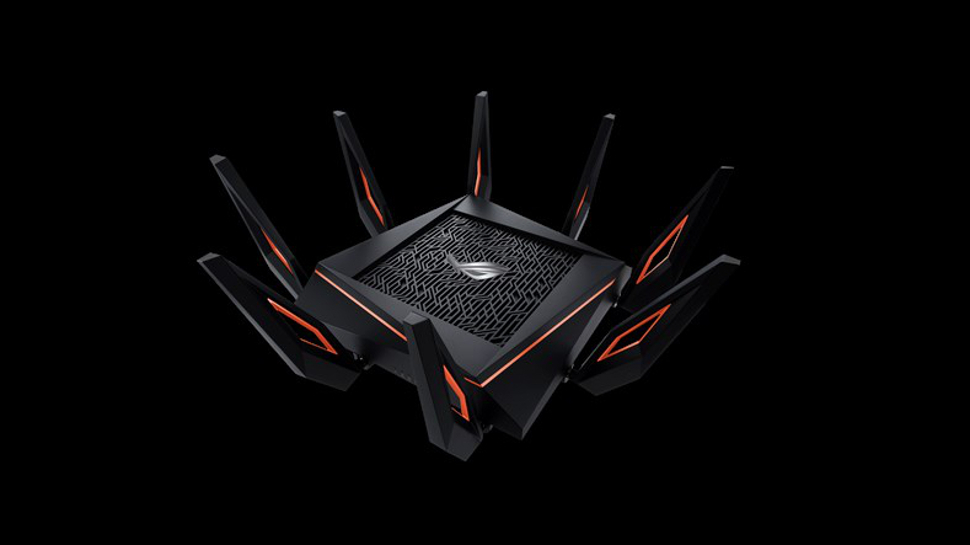 If money is no object, and you want the absolute highest-end Asus router bristling with all the very latest whistles and bells, then here it is. The ROG Rapture GT-AX11000 is a gaming model, as the ROG brand denotes, and the device has game boosting features – but it’s good for everything you might want to throw at it, not just online games.

Like the above AX88U it sports 802.11ax, the very latest wireless standard (Wi-Fi 6) for extremely fast speeds even throughout a large house (there are eight antennas to help with Wi-Fi coverage). It also has a 2.5Gbit gaming Ethernet port, another nifty innovation.

You get a very reliable router that copes well with potential network congestion (thanks to 802.11ax), with plentiful features including Adaptive QoS for prioritizing traffic and parental controls. That said, you do pay for all this. 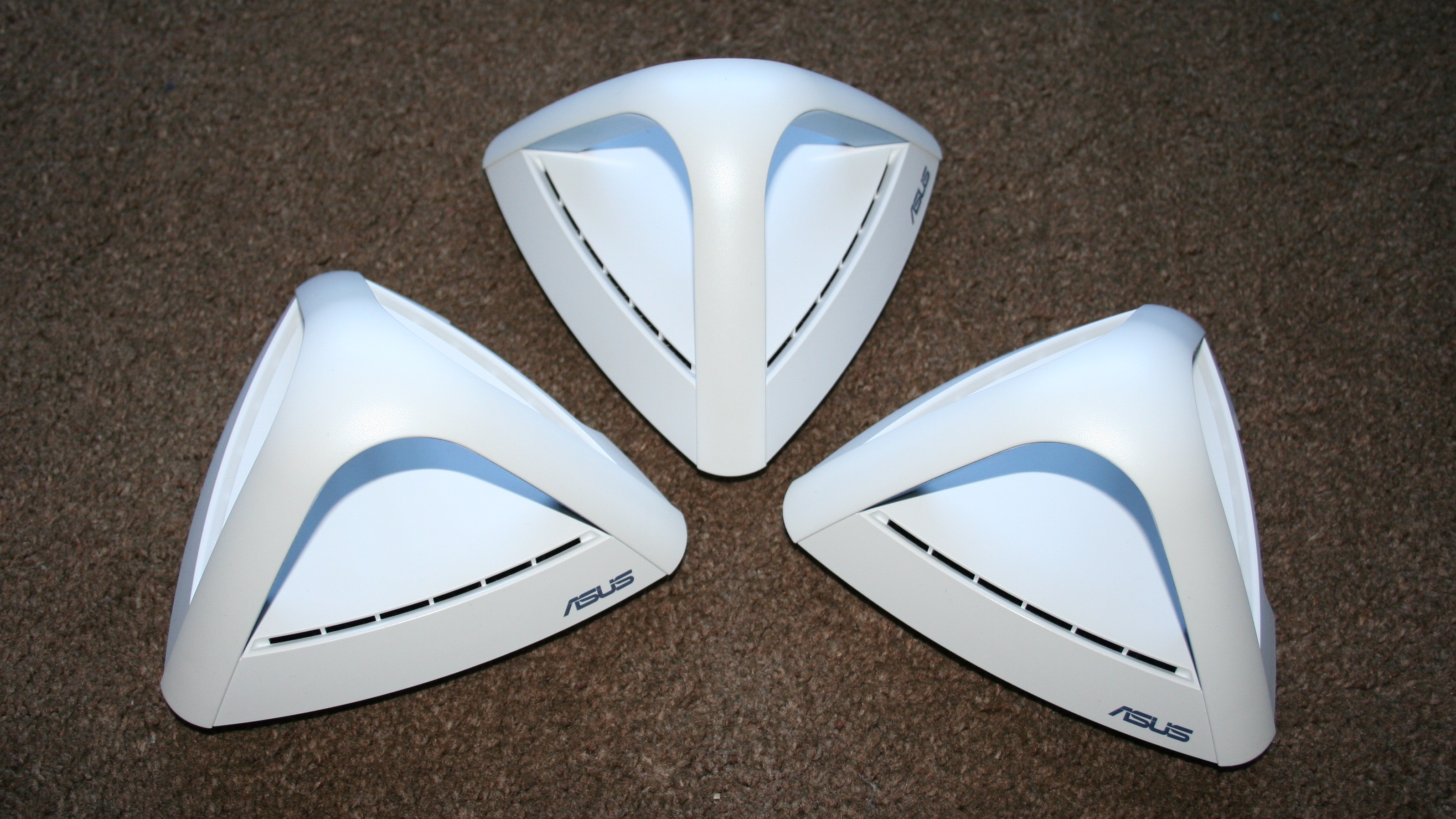 While we’ve pointed out some Asus routers with strong Wi-Fi coverage already, if you have a really big house, or other Wi-Fi dead-spot issues – perhaps caused by thick walls for example – then a mesh networking solution could be the way to go for the best wireless coverage.

In this case, Asus offers up the Lyra Trio, a three-pack of dual-band mesh Wi-Fi devices. The idea here is that one device acts as a router unit, and the other two are satellites placed throughout the home, grabbing the signal from the router unit and extending the Wi-Fi coverage. The Lyra Trio should cover a two or three story home of up to 375 square meters, according to Asus.

The main caveat here is that while we found overall performance solid enough in our review, the Lyra Trio was a tad inconsistent in terms of dropped connections, although potentially, firmware updates since then may (hopefully) have helped remedy this. Otherwise, Lyra is easy to install and configure, and competitively priced compared to rival mesh router products.

As an extra bonus, you can also do your ironing with the Lyra Trio (okay, so you can’t – but you’d be fully forgiven for thinking otherwise, looking at the devices). 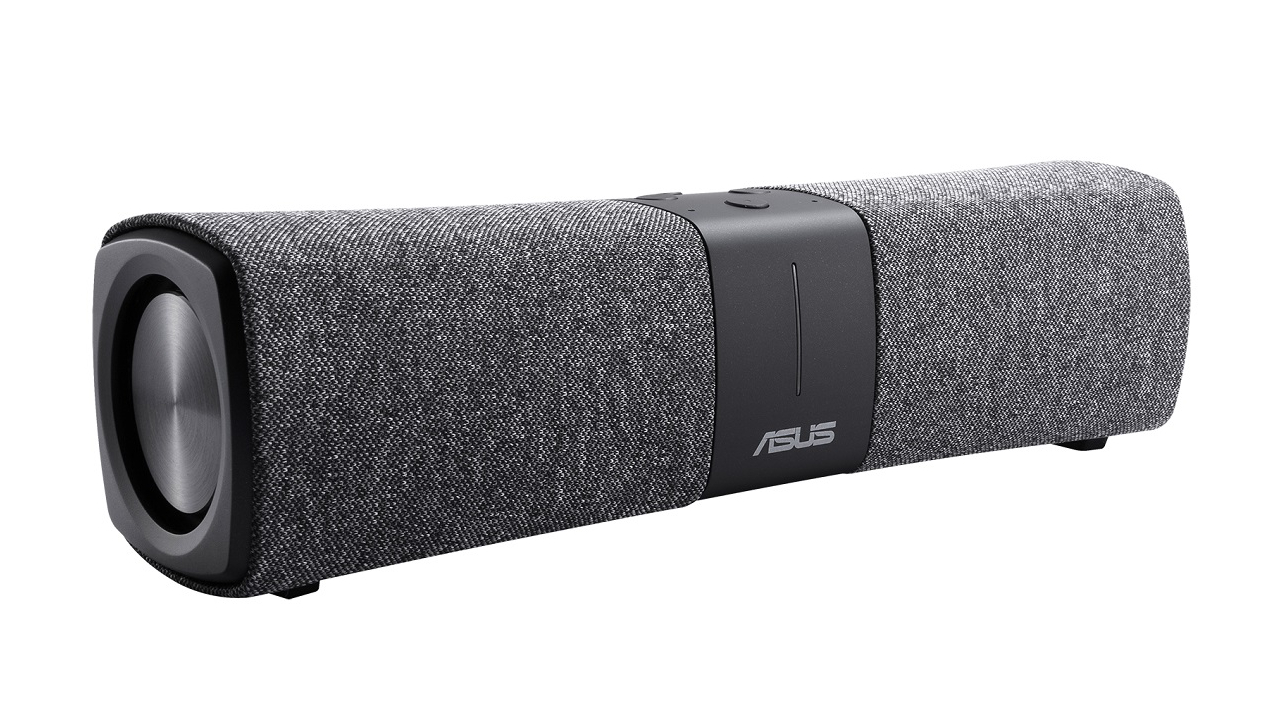 For those after something a little different with a router – and a device to fit well into any burgeoning smart home – consider the Lyra Voice. This is actually an AC2200 router crossed with an Alexa smart speaker, so one of the immediate benefits is that you’re combining two devices into one. And you’re getting a neat-looking router that will blend in nicely in any living room (or wherever you place it).

This tri-band router’s Wi-Fi performance is fairly impressive, and as a speaker, it actually sounds pretty good considering its relatively compact nature. The Lyra Voice is also a doddle to set up (via an app).

Downsides are that you only get one Gigabit LAN port (and a WAN port), and furthermore on the wired connectivity front, you don’t get any USB ports to hook up other devices to your network. Still, this remains a novel all-in-one solution which definitely has its appeal.